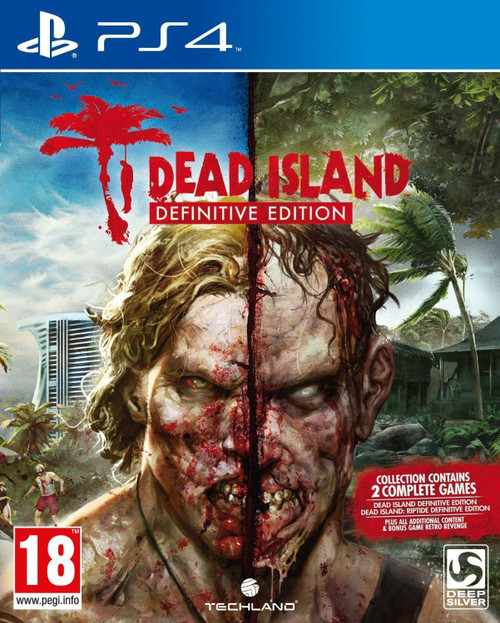 Deep Silver revisits the iconic bone-crunching terror of the original zombie-slaying smash hit as Dead Island and Dead: Island Riptide shuffle onto a whole new generation of consoles. Featuring fully remastered and greatly improved versions of the series' first two instalments, get ready for the ultimate Dead Island experience. Dead Island and Dead Island: Riptide have been completely overhauled utilising Techland's next gen engine, adding significant visual and performance upgrades, whilst introducing cutting edge current-generation graphical effects. Dead Island Definitive Collection is a compilation containing Dead Island Definitive Edition, Dead Island: Riptide Definitive Edition and also includes for free Dead Island Retro Revenge! Dead Island features an apparent open world roaming, divided by relatively large areas, and played from a first-person perspective. Most of the gameplay is built around combat (mainly melee weapons) and completing quests. Dead Island is an action role-playing game and uses experience-based gameplay. The player earns XP by completing tasks and killing enemies. Upon levelling up, the player gains health and stamina, and can invest one skill point into a skill tree and level up one of their skills. Combat is carried out through either physical attacks or through the use of melee weapons and firearms. Melee weapons are emphasised to the point that firearms are not available for the first half of the game, and consist of blunt and bladed weapons. Melee weapons can also be thrown at targets at any point in the game. Weapons are randomly generated and positioned in predetermined locations as well as found on some enemies; they have unique stats which are generally based on the player's current level. Each weapon can be upgraded three times to increase its stats, and most weapons can be "modded" – customised based on a blueprint to add special features, such as nails or electrified blades, and poison.These weapons will wear out from constant usage and require repairs and careful use. There is also a stamina bar, meaning that after a set amount of physical action, such as running, jumping, or swinging a weapon, the character needs to stop to regain his or her stamina. Fighting with a high level zombie will result in the player often running out of stamina and potentially being killed. The game features "special class" zombies, which are more powerful than the standard zombie.Players need to use flashlights in dark areas and during night-time sections, adding suspense. Zombies in the game have different abilities, such as the Walkers being Romero style zombies and the Infected being 28 Days Later style running zombies. There are also other special zombies in the style of Left 4 Dead.

Dead Island takes place in July 2006 on the fictional island of Banoi, a lush, tropical resort destination located off the east coast of Papua New Guinea, just north of Australia. In recent years Banoi was able to modernise thanks to its tourism industry, but many areas of the island are still wild, primitive and untouched by the modern world. Even though its capital Moresby was founded by Australian settlers in 1895, many of the island's interior areas deep in the jungle have still never been seen by western eyes. Banoi is known internationally as the location of the popular Royal Palms Resort, a luxurious five-star hotel resort which often attracts high-profile celebrities and throws wild dance parties. Banoi also hosts a Maximum Security Prison off the coast on a smaller island. It was designed as a privately-owned maximum security prison facility for international terrorists and criminals. The island has a modern police force and its own military called the Banoi Island Defense Force (B.I.D.F.) in charge of defending and providing security to Banoi. Later Dead Island games reveal that Banoi is apart of an archipelago of smaller islands, those islands consist of Palanai, Amaia and Narapela.

MSRP:
Was:
Price Now
AED269.00
×
Join the Conversation! Chat with Humans Not Bots!