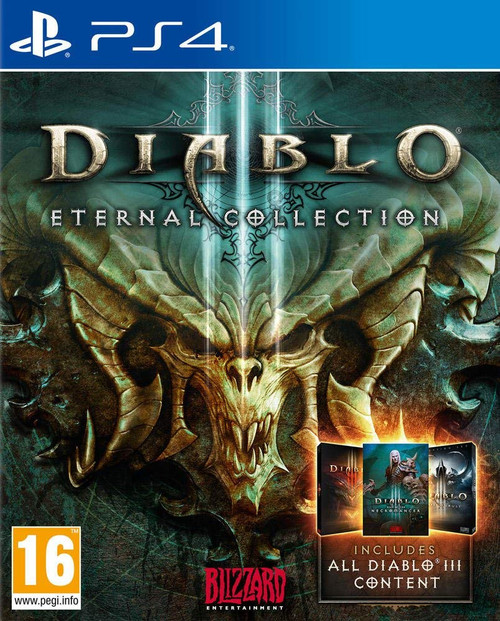 Includes the following content, initially sold separately; Diablo III Signs of the end times draw powerful heroes from all over Sanctuary to rise up and defeat an evil reborn • 5 hero classes: Barbarian, Wizard, Monk, Witch Doctor, and Demon Hunter • Descend into the depths of Hell and fight alongside the forces of Heaven across an epic 4 Act campaign • Play with up to 4 friends online (PlayStationPlus subscription required for Playstation4, Xbox Live membership required for XBox One) Diablo III: Reaper of souls Challenge Death itself as Malthael-Angel of Death-attempts to harness the infernal powers of the Black Soulstone. • Introduces the Crusader hero class • Expands the story into Westmarch and Pandemonium in a 5th Act • New ways to get loot and rewards through Bounties and Rifts in Adventure mode • Introduces ongoing Seasonal Updates with exclusive rewards, challenges, and player leaderboards that get refreshed every few months Rise of the Necromancer Commanding the powers of blood, bone, and armies of undead, the Necromancer joins the fight • Introduces the Necromancer hero class • 2 additional character slots • 2 additional tabs for your item stash • Cosmetics including the Wings of the Crypt Guardian, the Half-formed Golem Pet, and the Necromancer Banner, Sigil, and Pennant Much like in Diablo and Diablo II, the quality and attributes of equipment are randomized. In addition to base stats (such as damage and attack speed for weapon or armor points on armor), higher-quality items have additional properties, such as extra damage, attribute bonuses, bonuses to critical hit chance or sockets (which allow items to be upgraded and customized by adding gems for various stat bonuses). Magic-quality items have 1 to 3 random properties, rare-quality items have 4 to 6 random properties and legendary-quality items typically have 6 to 8 properties with varying degrees of randomness (for example, the Mempo of Twilight, a legendary helm, always has a socket, bonuses to elemental resistance, attack speed and life, a bonus to either Intelligence, Dexterity or Strength, and one additional random property, however the magnitude of these bonuses varies from item to item), and set items are a subtype of legendary items which provide additional, cumulative bonuses if multiple items from the same set are simultaneously equipped. Higher level monsters tend to drop higher level items, which tend to have higher base stats and bonuses. The proprietary engine incorporates Blizzard's custom in-house physics, and features destructible environments with an in-game damage effect. The developers sought to make the game run on a wide range of systems without requiring DirectX 10.Diablo III uses a custom 3D game engine in order to present an overhead view to the player, in a somewhat similar way to the isometric view used in previous games in the series.Enemies utilize the 3D environment as well, in ways such as crawling up the side of a wall from below into the combat area. An enhanced quest system, a random level generator, and a random encounter generator are used in order to ensure the game provides different experiences when replayed. Unlike previous iterations, gold can be picked up merely by touching it, or coming within range, adjusted by gear, rather than having to manually pick it up. One of the new features intended to speed gameplay is that health orbs drop from enemies, replacing the need to have a potion bar, which itself is replaced by a skill bar that allows a player to assign quick bar buttons to skills and spells; previously, players could only assign two skills (one for each mouse button) and had to swap skills with the keyboard or mousewheel. Players can still assign specific attacks to mouse buttons. Skill runes, another new feature, are skill modifiers that are unlocked as the player levels up. Unlike the socketable runes in Diablo II, skill runes are not items but instead provide options for enhancing skills, often completely changing the gameplay of each skill.For example, one skill rune for the Wizard's meteor ability reduces its arcane power cost, while another turns the meteor to ice, causing cold damage rather than fire.

Dishonored Death of the Outsider - PS4