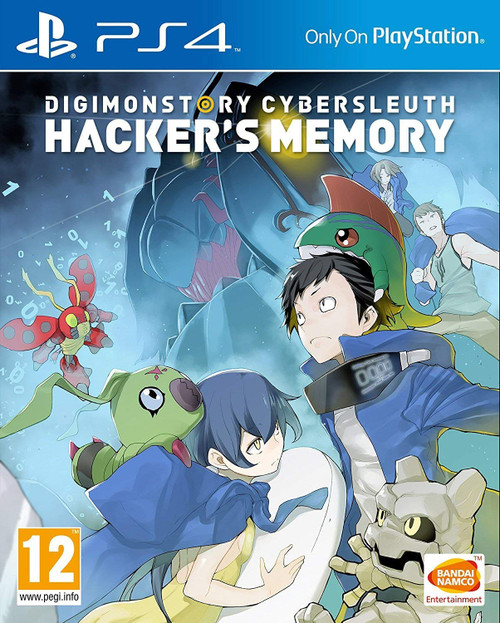 Digimon Story: Cyber Sleuth is a role-playing video game developed by Media.Vision and published by Bandai Namco Entertainment for PlayStation Vita and PlayStation 4, based on the Digimon franchise.It is the fifth game in the Digimon Storyseries, following 2011's Super Xros Wars, and the first to be released on home consoles. An English version of the game was released in early February 2016, and features cross-save functionality between the two platforms. Unlike previous Digimon games, it does not have an English dub and retains Japanese voice acting. A sequel, titled Digimon Story: Cyber Sleuth – Hacker's Memory, will be released in Japan in 2017 and in Western territories in early 2018 for PlayStation 4 and PlayStation Vita Hack your way to the truth! After being accused of a crime he didn’t commit, Keisuke Amazawa has no choice but to dive into the digital world and investigate to prove his innocence. Even if that means joining a group of hackers and help them to solve the troubles threatening this mysterious universe. Between real and digital, here lies the truth! The premise is that the player assumes the role of either Takumi Aiba  (male) or Ami Aiba , a Japanese amateur hacker. While Aiba is hanging out in a chatroom, a hacker infiltrates it and leaves a message telling the members within to log into Cyberspace EDEN, a popular physical-interaction cyberspace network, to receive a "wonderful present." Although most of the room members declare it to be too suspicious to involve in, Aiba, along with users "Akkino" and "Blue Box" decide to look into it. Aiba meets them the next day as arranged in Kowloon, a hacker-infested area of EDEN, where they introduce themselves as Nokia Shiramine and Arata Sanada; shortly after, the three of them are given the "Digimon Capture" by the unknown hacker and locked into Kowloon. While searching for an exit, Aiba runs into a hacker named Yuugo, the leader of the hacker team Zaxon who resembles a rumored "white boy ghost" said to have been sighted around EDEN, who teaches them how to use their Digimon Capture and reveals that Arata is, in fact, a skilled hacker. Shortly afterward, Aiba, Nokia, and Arata run into a mysterious creature that attacks them, and although Arata manages to hack open a way out for them, the creature grabs onto Aiba's leg and corrupts their logout process. Aiba emerges in the real world as a half-digitized entity and is rescued by a detective named Kyoko Kuremi , head of the Kuremi Detective Agency , who specializes in cyber-crimes and offers to take them into her service as her assistant. Aiba manifests an ability called Connect Jump, which allows them to travel into and through networks. The game after that splits into three different simultaneous plotlines: • Aiba helps Nokia reunite with an Agumon and Gabumon she'd met and bonded within Kowloon; she learns from them that Digimon are not hacker programs (as the public believes them to be) but living beings that come from a "Digital World", and that Agumon and Gabumon came to EDEN for a specific purpose that they can't remember. Nokia vows to help them recover their memories, but soon after begins to flee from confrontations with dangerous hackers; after being soundly defeated by Zaxon team hacker Fei Wong Tomoe Ignacio, she decides to become stronger and form her own hacker group, the Rebels, for the sake of improving relations between humans and Digimon. Her hard work allows Agumon and Gabumon to digivolve into WarGreymon and MetalGarurumon and sheer positivity ends up gaining her a large number of followers, causing Yuugo to worry that she might interfere with his goals of protecting EDEN and its hackers. • Arata, who remains evasive about his own past as a hacker, assists Aiba in investigating "Digital Shift" phenomena around Tokyo, in which areas become mysteriously half-digitized. They meet a scientist named Akemi Suedou who identifies the mysterious creature as an "Eater," a corrupted mass of data that is responsible for digitizing areas and causing human victims to fall into a comatose state called "EDEN Syndrome" by "eating" its mental data. Further encounters with Eater signify that it has links to the "white boy ghost" that keeps appearing around it, and that by "eating" data it can evolve into different forms. After Arata learns the truth about Aiba's condition and witnesses many acquaintances become victims of EDEN Syndrome, he resolves to do whatever he can to save them. • Yuuko Kamishiro, the daughter of the former president of Kamishiro Enterprises (the company that manages EDEN), requests Kyoko's detective agency to investigate her father's purported suicide and assists them in infiltrating the company when needed. Investigations via hacking into Kamishiro Enterprises areas reveal that the company's current president, Rie Kishibe, is planning significant EDEN update that ties into something called the "Paradise Lost Plan." Along the way, Aiba learns that Yuuko's older brother is, in fact, a victim of EDEN Syndrome.

Cyber Punk Atmosphere: Dive into a deeper and darker adventure, at crossroads between real and digital. Digimon Story: Cyber Sleuth is a role-playing game, played from a third-person perspective where players explore control a human character with the ability to command Digimon, digital creatures with their own unique abilities who do battle against other Digimon. Players can choose between either Palmon, Terriermon or Hagurumon as their starting partner at the beginning of the game, with more able to be obtained as they make their way into new areas. A total of 249 unique Digimon are featured, including seven that were available as DLC throughout the life of the game, and two which were exclusive to the Western release.The title features a New Game Plus mode where players retain all of their Digimon, non-key items, money, memory, sleuth rank, scan percentages, and Digifarm progress.