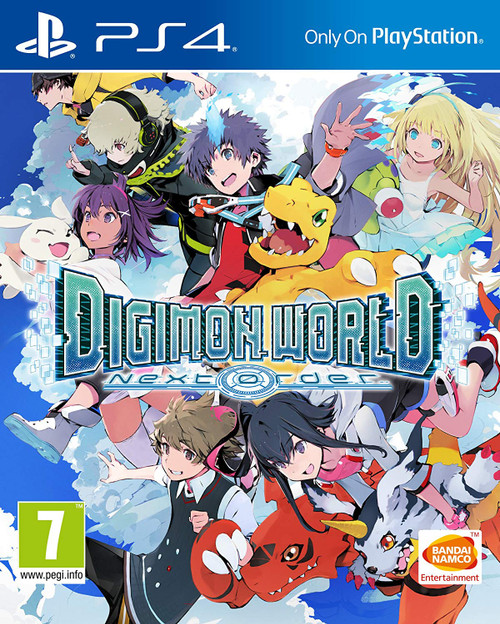 Digimon World: Next Order (stylized as DIGIMON WORLD -next 0rder-) is a Digimon role-playing video game developed by B.B. Studio and published by Bandai Namco Entertainment for PlayStation Vita and PlayStation 4. The PlayStation Vita version was released in Japan on March 17, 2016, while the PlayStation 4 version was released internationally in January 2017. In Japan, the PlayStation 4 version is known as Digimon World: Next Order International Edition and was released on February 26, 2017 YOUR FATED RETURN TO THE DIGITAL WORLD! The Digimon World series returns with Digimon World: Next Order! An all-new adventure & story awaits! The Digital World is in despair and on the verge of collapsing… they need your help! Explore and traverse this exciting universe to solve a digi-mystery infecting some of the Digimon. Recruit faithful Digimon companions and meet friends along the way to battle by your side through this epic journey. The Digital World is waiting for you… For the first time ever in the series, explore the Digital World with not one, but TWO Digimon partners! Choose between a male or female protagonist Recruit and Battle over 215 Digimon! Digimon World: Next Order is a role-playing game set in an open world environment and played from a third-person perspective where players take control of a human character who is accompanied by two partner Digimon. The player chooses from ten possible starting companions at the beginning of the game, who grow and evolve throughout the course of the story by taking part in battles and interacting with their owner. Players can increase the bond between their Digimon and themselves by praising, scolding, feeding, or offering items. Together, they travel through various environments completing objectives and advancing the story by interacting with non-player characters and battling enemy Digimon they encounter in the field. Battles themselves take place in real-time when an enemy creature is touched, which causes a circular-shaped battle area to appear which each partner is free to move within. The companion Digimon act automatically through an assigned AI strategy while the player can halt combat to issues commands or use restorative items. Players can switch between either partner in battle to issue specific commands or instigate a special evolution where both Digimon temporarily merge. After battle, their Digimon's stats are increased, making them stronger. A total of 217 obtainable Digimon creatures are available in the Japanese version of the game. with a further 15 added to the western version of the game, taking the total to 232. The game's story centers around two potential main characters: Japanese third-year high school students Takuto and Shiki  Takuto was once a passionate Digimon fan in his youth, even becoming runner-up in a national tournament, but has since become more concerned with adolescent life and wondering about his future. He and Shiki are transported to the Digital World, where they meet their Digimon partners, including Agumon, Gabumon, Biyomon and Palmon.They are joined on their journey by classmates Kouta Hirose , whose partner is Guilmon he nicknamed "Yukimura", and Himari Ōbuchi Ōbuchi Himari), who is partnered with a Salamon she nicknamed "Rikka"

Samantha Swift and the Hidden Roses of Athena