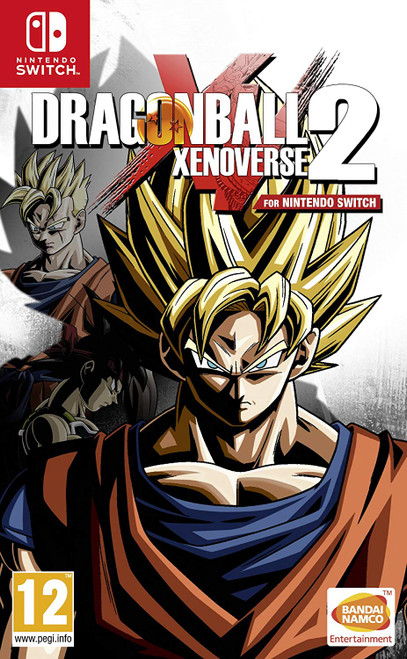 YOUR STORY, YOUR AVATAR, YOUR DRAGON BALL WORLD Featuring Nintendo Switch specific controls and functionality, players will be able to execute famous moves such as the KAMEHAMEHA and the Spirit Bomb with the Joy Con Motion Controls. Players will also be able to join friends for grand DRAGON BALL adventures through a six-player local play mode, exclusive to the Nintendo Switch.
Dragon Ball Xenoverse 2 is a fighting role-playing video game developed by Dimps and published by Bandai Namco Entertainmentbased on the Dragon Ball franchise.It is the sequel to Dragon Ball Xenoverse that was released on February 5, 2015.It was released in October 2016 for PlayStation 4, Xbox One and on October 27 for Microsoft Windows. In Japan, Dragon Ball Xenoverse 2was initially only available on PlayStation 4.The game was released for the Nintendo Switch in Japan on September 7, 2017 and later released worldwide on September 22, 2017.Produced and Developed By Bandai QLOC And Dimps.
Main Story/Campaign Length
25-50 Hours This version of the game will take advantage of the incredible features of the console like motion control option during the battles, local ad-hoc multiplayer up to 6, local battle with 2 Joy-Con, 1 system AND the chance to play wherever you want! The game is very similar to its predecessor in terms of gameplay; it is mostly set in a series of 3D battle arenas mostly modeled after notable locations in the Dragon Ball universe, with the central hub being an expanded version of Toki-Toki City, called Conton City. As reported by the creators of the game, Conton City is seven times larger than Toki-Toki City. Players are able to freely traverse this new hub world, and in some areas are even capable of flying around, however this feature will not be available from start, instead being unlocked. Players will also be able to travel to other hubs such as the Namekian Village and Frieza's ship. Some skills will have to be learned through masters, like the previous game. However, some masters will be found exclusively in these extra hubs. Xenoverse 2is the fourth Dragon Ball video game to feature character customization. Players are able to choose from the five races of the first game: Humans, Saiyans, Majins, Namekians and Frieza's race. The game also features race-specific quests, minigames and transformations (the latter of which was only available to Saiyans in the first game, via the Super Saiyan forms). Players also have a much greater role in the story, as some decisions will have to be made by them. Multiplayer servers are now able to hold up to 300 players at once. The game also has a training mode called Training School. The player can use different kinds of ki blasts (Power, Homing, Rush, Paralyze and Bomb), and the ki blast type depends on the player's race or Super Soul. Another interesting element in the game is that players will be able to transfer their previous data from Dragon Ball XV 2's predecessor, Dragon Ball Xenoverse. Dragon Ball Xenoverse 2 gives players an all new Dragon Ball experience: Fly around Conton City with up to 300 other players, face off against super powered bosses with 6-player teams and create your own character to save the Dragon Ball timeline in style. Dragon Ball Xenoverse 2 builds upon the highly popular Dragon Ball Xenoverse and will further immerse players into the largest and most detailed Dragon Ball world ever developed.

MSRP:
Was:
Price Now
AED249.00
×
Join the Conversation! Chat with Humans Not Bots!