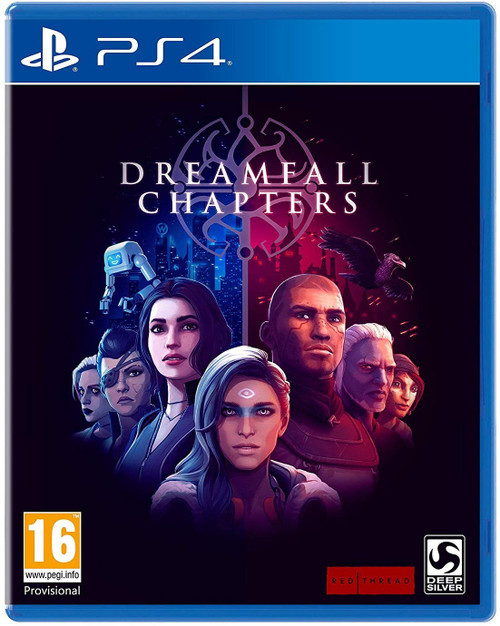 Dreamfall Chapters is a story about choices and consequences, dreams and reality, magic and science, chaos and order, and the broken heroes whose actions will shape the course of history in all worlds. Set in parallel worlds - one a dark cyberpunk vision of our future, the other a magical fantasy realm - the game follows two unlikely heroes on their journeys across worlds to save the very fabric of reality from falling apart. Dreamfall Chapters is a mature, emotional, dark, magical and heartbreaking adventure that will take you by surprise. With a brand new storyline and a fresh cast of characters, Dreamfall Chapters introduces new players to the award-winning The Longest Journey saga, while returning players will get the conclusion they have been waiting for since the end of Dreamfall: The Longest Journey. Dreamfall Chapters was originally developed on the Unity 4 game engine, but was retroactively upgraded to Unity 5 before the release of Book Four.It features large 3D environments, as opposed to 2D backgrounds in The Longest Journey and smaller 3D locations in Dreamfall. While not a completely open world, the game contains several free-roaming exploration levels, such as Europolis and Marcuria,and rewards players for exploring the levels and finding secrets.The locations themselves change slightly as the story progresses to reflect the passage of time. The player steers playable characters from over-the-shoulder third-person view, using the WASD keys and mouselook. Interactive characters and objects are highlighted on the screen, allowing the player to interact with them using the mouse and context menus.While the game supports game controllers, it was optimized for the PC. The gameplay focus is on the exploration of the environments and the storyand on solving puzzles.Dialogue with NPCs and dialogue puzzles comprise about half of the gameplay time.The on-screen interface is hidden by default to improve the immersion.There is no combat or stealth gameplay in Dreamfall Chapters. Although the game features a linear plot with a set outcome,the players have to make many choices throughout the game that have far-reaching impact on the later story events (but not the ending). An optional, online-only "social" feature allows players to discover (either before, or after making the choice) which options other players (and their Facebook friends in particular) picked in these situations.These statistics are stored in a shared global database for all platforms.The game additionally displays a special "The balance has shifted" icon to warn players before plot-relevant choices, even when playing offline.An in-game journal, akin to April Ryan's diary in TLJ, keeps track of the recent plot developments. Chapters includes a recap of the previous games to ease the new players into the story. At the time of the Kickstarter campaign, the developers planned for it to become the final game in what they called "the Dreamer Cycle", but not in The Longest Journey series as a whole.This had changed during development, however, and Book Five was presented as the conclusion to the entire saga upon release.

In the mythology of the series, Earth is one of countless worlds in the multiverse, created from the primordial Storytime by the dreaming of a being known as Lux, the First Dreamer.Earth, or "Stark" as it is known in the game, is a world of science existing in Balance with its "Twin World" of magic, Arcadia, split off and separated from it by the impassable Divide twelve millennia ago. The game takes place in 2220 CE by Stark's reckoning, and its chief antagonist is Brian Westhouse, a Starkian trapped in Arcadia, who plans to return home by forcibly reuniting the Twin Worlds with the power of the Undreaming, the destructive counterpart to Lux. To strengthen the Undreaming with dream energy, Westhouse, as "the Prophet", had conspired with the corrupt officials of the Azadi Empire in Arcadia and an ambitious Starkian scientist Helena Chang to build a giant dream-storing Engine in the recently conquered Arcadian city-state of Marcuria and to imbue it with the dream energy stolen from Stark by Chang's lucid dream-inducing invention, the "Dreamachines". Chang had also secretly planned to instead use the stolen dream energy to reshape reality itself with the help of her genetically engineered "Dreamers", i.e. humans with powers equal to Lux. She had deemed her first artificial Dreamer a failure, however, and the girl was instead raised by Chang's partner Gabriel Castillo as his own daughter, Zoë. In Dreamfall, a 20-year-old Zoë had learned that Chang's sponsors, the Japan-based megacorporation WatiCorp, planned to brainwashDreamachine users in a bid for world domination, but after failing to stop them, she was put into a coma by Chang. At the same time in Arcadia, an elite Azadi operative Kian Alvane investigated the corruption in Marcuria but was charged with high treason and imprisoned. In Chapters, their stories finally converge in Book Five, where they also tie in with the arc of the third playable character, Saga, which, until then, is mainly told in the Interludes.