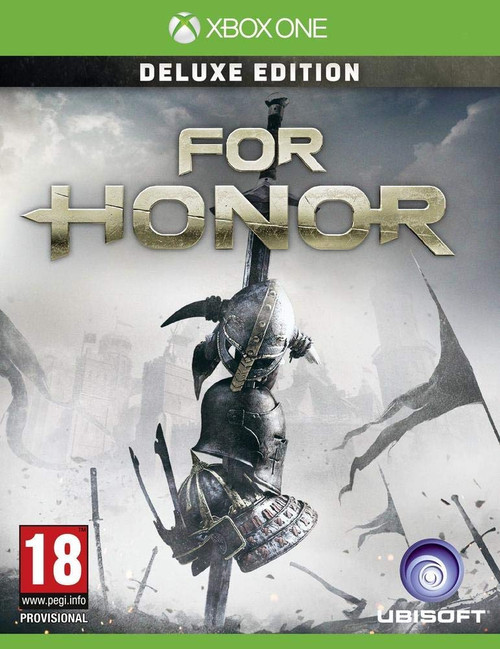 Enter the chaos of a raging war as a bold knight, brutal viking, or mysterious samurai, three of the greatest legendary warriors. For Honor is a fast-paced, competitive experience mixing skill, strategy, and team play with visceral melee combat.

Enter the chaos of war as a bold Knight, a brutal Viking, or a deadly Samurai: the greatest warriors of legend. Play the thrilling story campaign or fight in brutal multiplayer modes, now on new dedicated servers. The Deluxe Edition includes the game Deluxe Pack. Deluxe Pack: The Special Execution Sunbeam Effect, 3 unique helmet crests, 3 emblems, and 7 days of Champion Status. Choose a faction, grab your sword, and fight with your allies to survive in innovative PvP melee combat. Dedicated servers provide a stable and seamless experience as you fight to claim victory for your faction. Enjoy an evolved experience – with 12 Heroes, 18 maps, new PvP and ranked modes, thousands of gear items, and more since launch.

For Honor is an action fighting game set during a medieval, post-apocalypse fantasy setting.Players can play as a character from three different factions, namely the Iron Legion, the Chosen, and the Warborn. The three factions represent knights, samurai, and vikings, respectively.Each faction had four classes at launch, with two more being added at the beginning of every season of the Faction War. Each faction's warriors speak their respective languages in game. The knights speak classical and modified Latin, the vikings speak Icelandic, and the samurai speak Japanese. The Vanguard class is described as "well-balanced" and has excellent offense and defense. The Assassin class is fast and efficient in dueling enemies, but the class deals much less damage to enemies. The Heavies are more resistant to damages and are suitable for holding capture points, though their attacks are slow. The last class, known as "Hybrids", are a combination of two of the three types, and is capable of using uncommon skills.
Carve a path of destruction through the battlefield in For Honor, a brand-new game developed by the renowned Ubisoft Montreal studio.
Enter the chaos of a raging war as a bold knight, brutal viking, or mysterious samurai, three of the greatest warrior legacies. For Honor is a fast-paced, competitive experience mixing skill, strategy, and team play with visceral melee combat.

The Art of Battle, For Honor's innovative control system, puts you in total control of your heroes, each with distinct skills and weapons, as you fight for land, glory, and honor. As a skilled warrior on an intense believable battleground, you annihilate all soldiers, archers, and opposing heroes who stand in your way.

MSRP:
Was:
Price Now
AED220.00
×
Join the Conversation! Chat with Humans Not Bots!