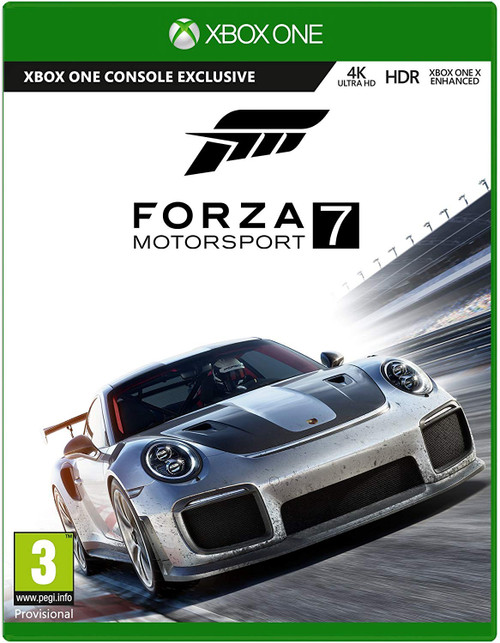 THE ULTIMATE RACING EXPERIENCE. BUILT FOR 4K. The best-selling racing franchise on any platform this generation. Experience the thrill of motorsport at the limit with the most comprehensive, beautiful and authentic racing game ever made. Enjoy gorgeous graphics at 60fps and true 4K resolution in HDR. Collect and race more than 700 cars. Challenge yourself across 30 famous destinations and 200 ribbons, where race conditions can change every lap and every race. With “Forza Motorsport 7,” everyone can experience the danger and beauty of competitive racing at the limit. Enjoy gorgeous graphics at 60fps and immersive native 4K resolution in HDR. Collect over 700 Forzavista cars, including the largest collection of Ferraris, Lamborghinis and Porsches available in any racing game. Master over 30 famous environments with dynamic conditions that change every time you race. Forza Motorsport 7 is a racing video game featuring over 700 cars—including new Forza Edition cars, most of which have been brought over from Forza Horizon 3—and more than 200 different configurations to race on across 32 locations at launch, including all from Forza Motorsport 6; a fictional street circuit in Dubai is one of the new circuits and several tracks returning from Forza Motorsport 4 including Maple Valley Raceway, Mugello Circuit and Suzuka Circuit. Two features that are new to the Motorsport title include dynamic weather (previously seen in Horizon titles) and customisable drivers
Key Features

MSRP:
Was:
Price Now
AED249.00
×
Join the Conversation! Chat with Humans Not Bots!