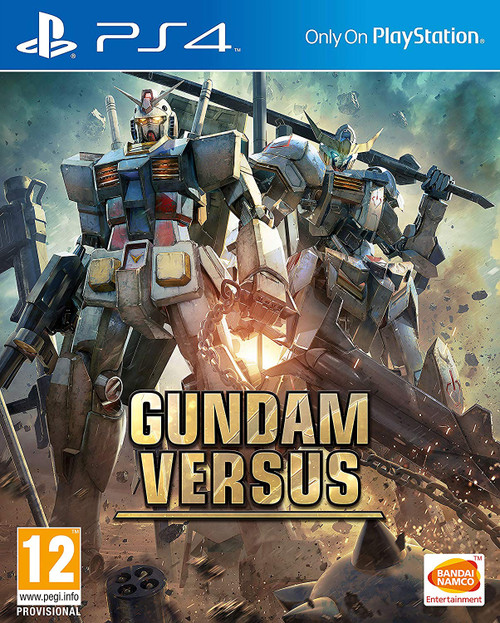 Gundam Versus  is a video game for the PlayStation 4, the fifth generation in the Gundam VS series. It was released in Japan and Asian territories on July 6, 2017 with a North American and European release on September 29, 2017. The game features improved graphics and more detailed background destruction and will retain its 2v2 format, although now 3v3 battles are now possible. The game still retains its team battle gameplay but will also include modes only possible on the PlayStation 4. Along with the standard Boost Step and Boost Dash techniques, a new "Boost Dive" mechanic allows for players to boost downward at will, making combat much more fluid and quick. The Assist mechanic from Gundam Vs Gundam Next has been reworked into Strikers, which allows players to select their own assist unit, with over 180 to unlock and choose, allowing for flexibility in combos. Like the Assists from that game, Striker usage is finite, though it can be replenished by activating Burst. Through the MS Development Tree, players can unlock additional titles, Emblems, Strikers, Navigators and alternate pilots by leveling up MS units and spending GP. The Burst system has also reverted back to a more simplified form with Blazing Gear and Lightning Gear. Blazing Gear focuses on enhancing melee attributes while Lightning Gear improves lock-on range and ranged weaponry. In addition, these Burst modes not only enhance the user, but their partner as well, with Blaze replenishing ammo and Lightning replenishing Boost meter. In addition to the Arcade mode (named Trial Battle), the game features an Ultimate Battle, which serves as the game's survival mode. The player and a chosen partner will then run a gauntlet of enemy waves, the fifth of every run being a boss battle. After the fight, the player will have the chance to upgrade their stats or replenish the resource gauge, using Battle Points accumulated from battle performance. At random, an Extra Wave will commence; these can range from a myriad of fights like a standard fight or the ability to play as DLC suits, or more rarely, an opportunity to play as a Mobile Armor boss. Losing or winning these will not affect the player upon resuming the run. THE GUNDAM MECHA EXPERIENCE COMES TO PS4 FOR THE FIRST TIME EVER The world famous mobile suit Gundam series and notorious head-to-head smash hit series, GUNDAM VERSUS, is coming for the first time for home console, this time built from the ground up exclusively for the PlayStation 4 system. Battle in explosive online two-versus-two and three-versus-three team battles in this all-new title built from the ground up for the PlayStation 4 system. Each playable Mobile Suit comes equipped with its own weapons systems to learn and master. In battle you, as a player, will be allowed to go all out with blazing and lighting fast melee action in a robust selection of offline and online game modes. New quick actions bring more technical and strategic gameplay options. Call upon striker support characters to assist you in the heat of battle. Enhance your experience by choosing between two different Burst Systems: Blaze Gear and Lightning Gear, each with their own unique fighting characteristics to enhance melee combat, augment lock-on range and more! Players will also be able to beat the best player on Earth with the Online Matchmaking now deployed on worldwide servers.

MSRP:
Was:
Price Now
AED489.00
×
Join the Conversation! Chat with Humans Not Bots!