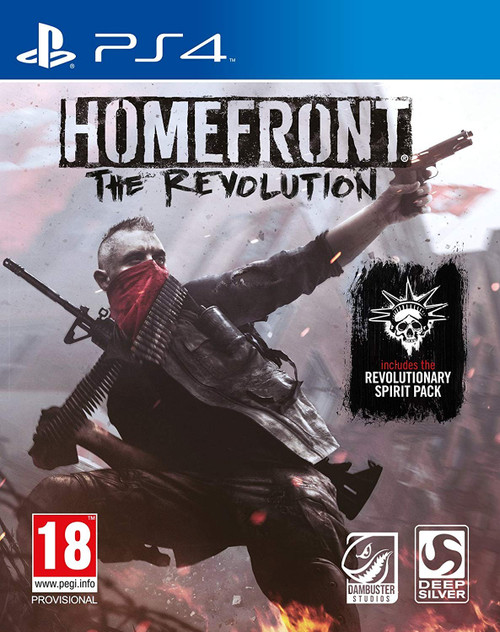 Homefront: The Revolution is a first-person shooter video game developed by Dambuster Studios and published by Deep Silver for Microsoft Windows, PlayStation 4 and Xbox One. It is the reboot/sequel to Homefront. Homefront: The Revolution takes place in 2029 in an alternate timeline, following the protagonist Ethan Brady as he stages a resistance movement against the army of a North Korean occupation in the city of Philadelphia. Homefront: The Revolution received mixed reviews upon release, with critics mostly praising the open world and weapon customization system, while criticizing the narrative, characters, and gunplay, as well as the technical issues for hampering the overall experience Home front: The Revolution is an open-world first person shooter where you must lead the Resistance movement in guerrilla warfare against a superior military force. A living, breathing, open world responds to your actions - you and your Resistance Cell can inspire a rebellion on the streets and turn Occupation into Revolution, as oppressed civilians take up the fight. But your enemy has the advantage - superior technology, firepower, heavy armour and air support. You must learn the art of guerrilla warfare - ambush, sabotage, infiltration, deception - and fight a running battle through the war-ravaged suburbs of Philadelphia. And the single player campaign is just the start - in Co-Op you and your friends can form your own Resistance Cell and become renowned as Heroes of the Revolution Story : Four years into the brutal military occupation, America is on its knees. Philadelphia - once the birthplace of Independence - has become a ghetto, where surveillance drones and armoured patrols keep the population at heel, crushing any dissent with savage force. Her once-proud citizens live in a police state, forced to collaborate just to survive, their dreams of freedom long since extinguished. But in the Badlands of the Red Zone, in the bombed out streets and abandoned subways, a Resistance is forming. A guerrilla force, determined to fight for their freedoms despite overwhelming odds and ignite the second American Revolution. But Freedom always has a price…

Experience true open world gameplay in a first person shooter, brought to life with astonishing CRYENGINE-powered visuals Wage Guerrilla Warfare - this is no linear shooter; learn the art of guerrilla warfare and use ambush, infiltration and hit and run tactics against your foe in thrilling un-scripted firefights

This is no linear shooter; learn the art of guerrilla warfare and use ambush, infiltration and hit and run tactics against your foe in thrilling un-scripted firefightT

Recruit revolutionaries to the cause, establish bases and safehouses, capture and customise a deadly arsenal, and build improvised, homebrew weapons for your Guerrilla Tool Kit

Form a Resistance Cell with your friends online, and wage guerrilla warfare against the military might of the KPA in thrilling narrative-driven Missions across occupied Philadelphia. Unlock new skills, earn weapon blueprints, rare equipment and combat gear to upgrade and cus-tomise your personal roster of Freedom Fighters, as you and your teammates go from rookie civil-ians to battle hardened soldiers.

The King of Fighters XIV - Day One Edition PS4