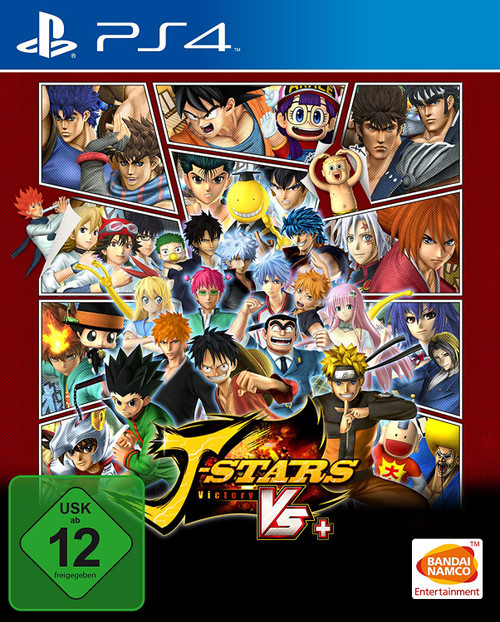 Get ready to battle it out as the most famous manga and anime stars of Shonen JUMP magazine’s 45 year history in J-Stars Victory Vs ! Take to the arena as Son Goku or Vegeta from DragonBallZ; take down your friends in multiplay as Monkey D. Luffy from One Piece or your favourite Naruto characters, and advance through the brand new arcade mode as Ichigo Kurasowa from Bleach! Players will be spoilt for choice with a huge choice of 52 characters from 32 of your favourite shonen franchises. Anime and manga fans are guaranteed epic battles with the 2 vs 2 team battle system offering a real challenge for fighting fans as it combines tough, strategic and exciting special combos and attacks. J-Stars Victory Vs celebrates the 45th anniversary of the Shonen Jump magazine and the 20th Anniversary of the V Jump magazine. The games invites fans and gamers to play as their favourite anime and manga characters and battle their way through different environments from their favourite series. Are you ready? J-Stars Victory VS lets up to four players battle it out against one another using a gameplay and graphical style similar to those of Dragon Ball: Zenkai Battle Royale. Fighters can move and fight in all directions on one of twelve 3D battle fields, each based on a location from a different Jump series. Players should learn the lay of the land and formulate a battle plan with a character suited to it. A defeated character comes back after a set amount of time passes. To win the battle, all three sections of the WIN gauge at the top of the screen have to be filled; the gauge fills one section each time an opponent is defeated. Fighters can use regular attacks, power attacks, area-based attacks, and finishing moves. Regular attacks are the main part of the battle, and all combos begin with them. Power attacks leave the user open, but they have a big impact if they connect and their power can be increased by charging them up. Area-based attacks allow to hit opponents over a wide area. By using different techniques, the player can lead his team to victory; learning each character's different power, range, and effects is the first step towards being unbeatable. Playable game modes include "J-Adventure", a multi-player story mode divided between four campaigns in which players explore a world map, battle various opponents, and collect in-game cards to power up their characters; "Victory Road", a multi-player battle mode in which players must complete certain predetermined objectives during battles; and a free-battle mode which supports up to two players in local offline play and up to four players via online multiplayer. An additional single-player Arcade Mode is exclusive to J-Stars Victory VS . The game's story mode, "J-Adventure," takes place in Jump World, an amalgamation of the different characters' universes. As the story begins, each of the characters is preparing for the Jump Battle Tournament, a fighting competition organized by the God of Jump World, who promises to grant the wishes of the team that wins. The narrative is split between four different arcs, each focusing on a different team exploring Jump World, gathering more teammates to compete, and working to achieve their own personal goals. The Dynamic Arc focuses on Monkey D Luffy, Portgas D Ace and Seiya; the Hope Arc on Naruto Uzumaki, Yusuke Urameshi, and Gon Freecss; the Investigation Arc on Toriko, Zebra, and Goku; and the Pursuit Arc on Ichigo Kurosaki, Tatsumi Oga, and Hiei. To progress, each team defeats tournament examiners to acquire upgrades for their ships so they can reach the arena; they also acquire additional allies in the wake of a mysterious enemy that can possess them. When one of the teams wins the tournament, the God of Jump World reveals the true purpose of the competition: to gather warriors to combat the Dark Phantoms, an evil force capable of impersonating strong fighters. Using the keys of Effort, Bravery and Friendship, the heroes travel to the Dark Phantoms' world and seal them away. With the Dark Phantoms defeated, all the heroes are offered a wish. They collectively wish to have another tournament so they can fight again and get stronger. Granting it, the God of Jump World rewards the heroes with a feast.

Jumanji: The Video Game Xbox One