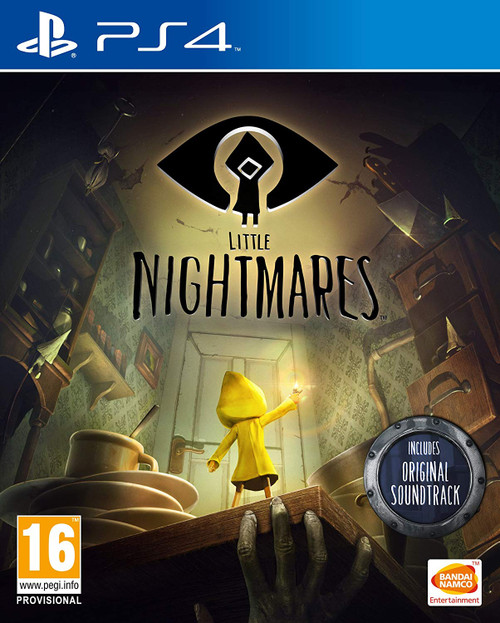 Immerse yourself in Little Nightmares, a dark whimsical tale that will confront you with your childhood fears! Embark on a grim shadow-filled adventure with an interactive storyline, outstanding sound design, and a unique art style that is sure to deliver eerie chills and goosebumps. Players will discover a world that blurs the lines between dreams and nightmares as they help Six escape The Maw - a vast, mysterious vessel inhabited by corrupted souls looking for their next meal. Consider every option and master Six's every movement in a super-sized world where even the smallest doubt can lead to a fatal misstep! A hungry little girl (whose name is Six) is trapped in the Maw – a mysterious vessel catering to the whims of sick and powerful creatures. After waking up in the lower depths of the Maw, Six decides to escape the harsh confines, having regular moments of excruciating, primal-like hunger. Whilst ascending, she soon becomes stalked by the long-armed blind Janitor of the Maw, who has been capturing the runaway children. She eventually becomes trapped by the Janitor after being lured by food, though she manages to escape. After evading the Janitor by cutting off his arms with a door, Six follows the conveyor belt upward, to a large kitchen operated by the grotesque Twin Chefs. After another bout of hunger, Six is forced to eat a live rat. The Chefs are preparing a large feast and attempt to kill Six whenever she enters their line of sight. After managing to evade them, she finds a way out of the vessel. Six observes a boat ferrying large, obese, suited Guests, who lumber to the Japanese-style dining area of the Maw, overseen by the Lady, otherwise known as the Geisha, the supposed leader of the Maw. After wading through the feast and its Guests, Six has another bout of hunger. When one of the Nomes, the recurring inhabitants of the Maw, offers her a sausage, Six eats the Nome instead. Whenever Six eats anything, a shadow version of her appears, showing that there is something more sinister about her. Six makes her way further upwards, entering the Lady's quarters. The Lady lives very lavishly in an elegant home with many broken mirrors throughout the rooms. Chased by the Lady, who displays magical powers, Six finds a mirror that she uses against the Lady in a battle. Defeating her, Six approaches the Lady and bites her neck, killing her and gaining her magical powers. Going downstairs to the dining area, Six walks along the tables with black particles swirling around her. As the Guests notice her presence, they attempt to eat her, but suddenly convulse and die as Six walks on. Six approaches a large door with an eye encrusted upon it, revealing a large staircase leading to the outside world. As she leaves the Maw behind, a few Nomes approach the door. After the end credits, Six is seen sitting by the entrance of the Maw, presumably awaiting rescue. Meanwhile, in the background, a foghorn from an approaching ship can be heard.

This War Of Mine - The Little Ones PS4