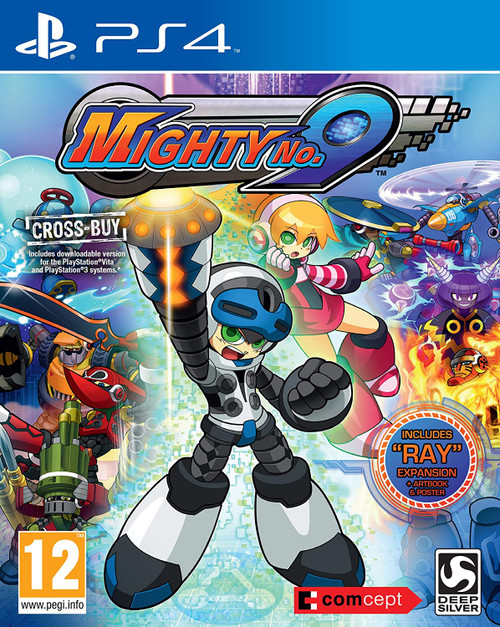 Mighty No. 9 is a Japanese 2D Side-scrolling Action game that takes the best elements from 8 and 16-bit classics that you know and love and transforms them with modern tech, fresh mechanics, and fan input into something fresh and amazing! You play as Beck, the 9th in a line of powerful robots, and the only one not infected by a mysterious computer virus that has caused mechanized creatures the world over to go berserk. Run, jump, blast, and transform your way through twelve stages using weapons and abilities stolen from your enemies to take down your fellow Mighty Number robots and confront the final evil that threatens the planet! Every aspect of Mighty No. 9's development-art, level design, music, programming, etc.-is being handled by veteran Japanese game creators with extensive experience in the genre, all the way up to and including the project's leader, Keiji Inafune himself! Mighty No. 9 is focused on 2D platforming with a blend of 2D and 3D artwork and animation. Players control a robot named Beck (Mighty No. 9), who is able to run, jump, and shoot projectiles at enemies he encounters. Furthermore, the player is able to acquire both weapons and abilities from enemies they defeat. The game features an intro level followed by the eight main levels, which are freely chosen in any order by the player. At the end of each stage, Beck must face one of the other eight "Mighty" units in a boss battle.A final set of levels are unlocked at the end of the game, leading up to the final showdown. An additional level starring Beck's partner, Call, is also available at some point. In addition to jumping and shooting, Beck's main ability is what the game calls "AcXelerate" (pronounced like "accelerate"), which can be used to move quickly and cross large gaps. Upon weakening enemies by shooting them, Beck can AcXelerate through them in order to absorb a substance known as Xel (pronounced "Cel"). Absorbing Xel from enemies grants Beck temporary enhancements, which are increased power for his attacks and able to shoot through walls (red), increased speed that allows Beck to run faster (green), and increased resistance to damage (yellow). There are also enemies that when weakened, they turn blue. These enemies will refill your AcXel Recover 1 (AcXel Recover 2 is filled only at "Patch" checkpoints), which can be used to heal Beck when the player pushes the particular button to activate it that has been set on their particular controller. By defeating bosses, Beck can obtain new transformation forms, giving him new abilities such as magnetic limbs that can be used in various ways to deal with the enemies as well as traversing the levels.Conversely, Call can't absorb Xel but can boost further than Beck and can use "Patch service bot" that can activate a shield that reflects projectiles and slows her fall. And Raychel's (DLC) gameplay is also largely similar to Beck's gameplay, but with a few notable differences. The first thing is her default attack is different, now being a melee attack than the one Beck has. An advantage, however, is that she instantly absorbs any enemy once it an enemy has too little health (doesn't necessarily even need to destabilize an enemy) to finish an enemy off. Her "AcXelerate" counterpart to Beck also has the added function of doubling as an attack (of course also absorbing enemies once they have too little health) and bounces off an enemy if they have enough health (or hits an invulnerable part of an enemy). This is different from Beck's maneuver in that it can't do damage and even stuns him for longer if he hits (for example) an enemy who isn't destabilized yet. However, the likely most notable difference is that of her health, which operates in a similar manner to the bosses. During the gameplay, her health will constantly be decreasing at a constant rate, but an example would be if it were to reach halfway, she takes damage, and she loses half of her health at that point. So basically, her health is decreasing, but it isn't actually decreasing, and to reset the process she has the options to either absorb an enemy or find a health item (the latter of which will also heal her, just like Beck). If she takes damage and the bar hasn't went down, she will take the exact amount of damage as Beck. She also earns different powers than Beck called "Variation Codes" that have different usages from the certain bosses she defeats. Some of the layout of certain stages have different have slight alterations, such as one stage that required Beck to use Mighty No. 6 power to get through substitutes "Heli-Hoops" to get through.