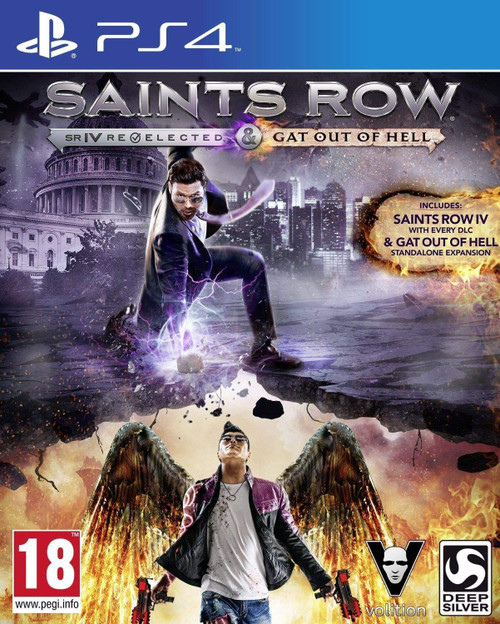 Saints Row IV: Re-Elected Gat out of Hell is so much more than a game. It's a passport to fun and whimsy. Leap over buildings, sing songs, fight in a 2D side-scroller, cure cancer, save Santa Claus... all this and more awaits you when you play Saints Row IV: Re-Elected, a special bundle that includes the award-winning blockbuster Saints Row IV and all of its' DLC. Saints Row IV is an open world action-adventure video game developed by Volition and published by Deep Silver. It is the fourth title in the Saints Row series. In the game, the playable character is the leader of the 3rd Street Saints, a street gang that has become the world's most powerful and popular organization, and must fend off an alien invasion after becoming President of the United States and receiving superpowers. The player is free to explore their environment while completing main and side missions at their leisure. The game incorporates elements from science fiction video games and films, and continues the series' reputation for over-the-top parody. It was released in August 2013 for Microsoft Windows, PlayStation 3, and Xbox 360, and was later ported to PlayStation 4, Xbox One, and Linux in 2015. The game was Volition's first after its sale to Koch Media in early 2013. The supernatural and superpower concept for the game started in Enter the Dominatrix, a cancelled expansion planned for Saints Row: The Third, which the team expanded into Saints Row IV. Volition later released a "director's cut" of Enter the Dominatrix as downloadable content for Saints Row IV alongside How the Saints Saved Christmas, other weapons, costumes, and vehicle packs, and a standalone expansion, Saints Row: Gat out of Hell(which serves as the epilogue to the story). Saints Row IV received several limited and summative edition releases, and was briefly banned in Australia. Critics praised Saints Row IV's humor and character customization options, but criticized its lack of challenge. It sold over one million copies in its first week. Similar to previous Saints Row series games,Saints Row IV is an open world action game with third-person shooter elements wherein the player is free to explore the environment and, at their leisure, play story or side missions. As the leader of the Saints, a street gang that has become the world's most "powerful and popular" organization, the player is elected President of the United States, receives superpowers, and fends off an alien invasion.Most often the player will engage in shooting and racing activities, though other activities vary from fighting crowds of zombies, shoot-outs in tanks,side-scrolling brawlers, fights against supersized, daikaiju energy drink cans, and using a dubstep gun to interrupt 1950s Americana.The player-character receives elemental powers and superpowers that greatly increase their jump height and running speed, such that the player can hop over buildings and outrun vehicles.The elemental powers include abilities to shoot fire and ice projectiles, telekinetically toss things, and create shockwaves upon landing jumps.As the player progresses through the game, they can optionally upgrade their abilities and weapons skill tree by using collectible "data clusters" scattered around town.If the player becomes too rowdy, the alien race's police analogue will intervene.As in previous games, the player-character's look and feel is entirely customizable via a robust character editor feature. City districts are "liberated" from alien occupation as the player completes side missions in occupied districts.Liberated districts increase the player's hourly income, which can be spent on weapons, skills, and perks. Side missions include Insurance Fraud (where the player jumps into traffic to collect insurance money),demolition derby-style Mayhem, and superpowered foot races. Saints Row IV has a two-player cooperative mode