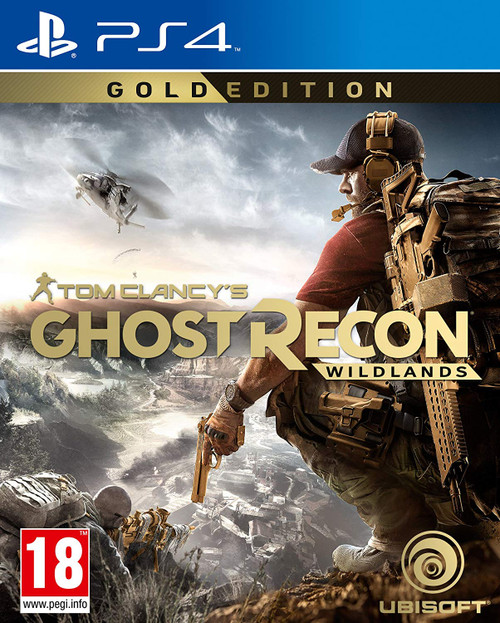 Bolivia, a few years from now: this beautiful South American country has become the largest cocaine producer in the world. The influential and vicious Santa Blanca drug cartel has turned the country into a narco-state, leading to lawlessness, fear, injustice, and violence. The cartel is on track to becoming a major underworld power and global threat. An all-out war is not the answer. A surgical, stealthy, lethal approach is the only way to stop the disease at its source. The Ghosts, an elite US Special Forces team, are sent behind enemy lines to wreak havoc, destabilize, and eventually break the alliance between the cartel and the corrupted government. Facing an almighty enemy in a massive and hostile environment, the Ghosts will need to make critical moral choices and engage in tough battles to complete their mission - their grittiest and most dangerous operation to date. Tom Clancy's Ghost Recon Wildlands is a tactical shooter game set in an open worldenvironment and played from a third-person perspective with an optional first person view for gun aiming. Players play as members of the Delta Company, First Battalion, 5th Special Forces Group, also known as "Ghosts", a fictional elite special operations unit of the United States Army under the Joint Special Operations Command.It does not feature the futuristic setting used in Advanced Warfighter and Future Soldier, but instead adopts a modern-day setting, similar to the original Tom Clancy's Ghost Recon. As a result, the equipment featured in the game is based on weapons and gear commonly used by military forces around the world.However, it features some original equipment, such as drones that can be used to tag enemies and show objectives. These drones have limited abilities until upgraded.The game is the first entry to feature an open world environment, which consists of nine different types of terrain, such as: mountains, forests, desert, salt flats, and also introduces a dynamic weather system as well as a day-night cycle.Completing missions during day-time allows players to spot enemies easily, while completing missions at night grants players a tactical advantage, as the night offers players better concealment and easier infiltration due to some guardsmen being asleep.Players are tasked with making observations before carrying out missions. A variety of vehicles, such as dirt bikes, helicopters and dune buggies are featured in the game.Unlike its predecessors, Wildlands features several side-missions. Each of the 21 areas on the map is controlled by a buchon, who is also associated with one of four divisions of the cartel's operations: Influence, Security, Production and Smuggling. Clearing missions in an area and collecting key intel unlocks missions where players can target a buchon and eliminate him or her by killing or capturing the target (with some exceptions). Eliminating enough buchones in an operations division allows players to target that division's underboss, and eliminating that underboss and all of the buchones in an operations division leaves the division head vulnerable. Capturing this division head cripples and destabilizes the division and makes the cartel boss more vulnerable. It features cooperative multiplayer mode, in which players can be joined by up to three other players to explore the game's world and to complete campaign missions.The game can also be played solo, in which the player will be accompanied by three AI teammates, which the player can give orders to.A competitive multiplayer mode has been released as part of a free update on October 10, 2017. It features an elimination type of game mode in a timed 4v4 match with revives. Players can level up through multiplayer gameplay which enables them to improve the different class of characters available.  As the Ghosts dismantle the cartel piece by piece, they are eventually contacted by the cartel's leader, El Sueño. El Sueño lures them to a meeting where he attempts to bribe the Ghosts into working for Santa Blanca. The Ghosts refuse, but are disturbed to learn that Sandoval was responsible for the embassy bombing to force the United States government to intervene in Bolivia. Eventually Pac Katari claims his men have found El Sueño, but the Ghosts grow suspicious when they find the body of Amaru. When they ask Bowman to set up a meeting with the rebel leader her transmission is cut short. The Ghosts find Bowman captive in the presence of the rebels. Pac Katari breaks their alliance, claiming that the rebels must kill El Sueño themselves to avoid being seen as puppets of the United States. The Ghosts race to El Sueño's mausoleum to capture him before Pac Katari kills him. After fighting their way through both rebel and cartel opposition, the Ghosts and Bowman surround El Sueño, who has beheaded Katari. Despite his surrendering, Bowman receives a call from her superiors, informing that El Sueño had made a deal with the Department of Justice to give up the heads of other drug cartels in exchange for immunity. How the story ends depends on whether the Ghosts fully dismantled the cartel. If remnants of the cartel remain, Bowman will execute El Sueño, leading to her dismissal from the CIA and her arrest for murdering El Sueño. She expresses no regrets in doing so, fearing that El Sueño would become a dictator with the United States' backing. If the Ghosts have fully dismantled the cartel and have taken down others involved with Santa Blanca, Bowman takes El Sueño into protective custody. El Sueño provides further intelligence on other drug cartels, terrorist groups, and arms smugglers. Bowman predicts that when the intelligence runs out, El Sueño will either be extradited by Mexico or cut loose and start a new drug cartel, starting the cycle over again. She and the Ghosts resolve to prepare themselves for the next fight