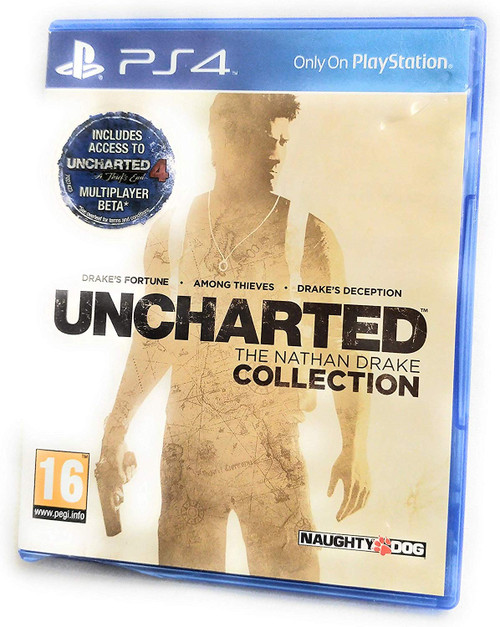 From the groundbreaking storytellers at Naughty Dog, comes the genre-defining epic that revolutionized adventure storytelling, rebuilt by Bluepoint Games with the power of the PS4 system. Experience one of the most revered game series of all time as you follow the perilous journey of Nathan Drake across the globe, from humble beginnings to extraordinary discoveries. Meet an unforgettable cast of characters as Drake puts life and friendship on the line in a race against ruthless enemies to uncover unimaginable treasure. UNCHARTED: The Nathan Drake Collection includes the singleplayer campaigns for UNCHARTED: Drake’s Fortune, UNCHARTED 2: Among Thieves, and UNCHARTED 3: Drake’s Deception. Unparalleled Story – Play as Nathan Drake across a trilogy of thrilling, white-knuckle adventures. Experience Drake’s relationships with those closest to him, as he struggles to balance adventure and family. New Trophies – Brand-new trophies created exclusively for UNCHARTED’s debut on the PS4 system. Photo Mode – Freeze gameplay at any time and take control of the camera to capture your most memorable moments from the trilogy to share with friends directly from your PS4 system. Utilize graphical filters, camera controls, and other options to customize your shot. UNCHARTED 4: A Thief’s End Multiplayer Beta – purchasers of UNCHARTED: The Nathan Drake Collection will receive exclusive access to UNCHARTED 4: A Thief’s End multiplayer Beta while the Beta is available.
Uncharted is an action-adventure third-person shooter platform video game series developed by Naughty Dog and published by Sony Interactive Entertainment for PlayStation consoles. The series follows protagonist Nathan "Nate" Drake (portrayed by Nolan Norththrough voice and motion capture) a charismatic yet obsessive treasure hunter who journeys across the world to uncover various historical mysteries. The main series began with Uncharted: Drake's Fortune released on the PlayStation 3 in 2007, followed by its sequels Uncharted 2: Among Thieves (2009), Uncharted 3: Drake's Deception (2011), with the final installment Uncharted 4: A Thief's End released on the PlayStation 4 in 2016. A prequel, Uncharted: Golden Abyss, was released for Sony's PlayStation Vita handheld system in 2011, followed by the card game spin-off Uncharted: Fight for Fortune in 2012. A standalone expansion to the series, Uncharted: The Lost Legacy, was released in 2017, with Chloe Frazer as the game's playable protagonist. All four games in the main series have been widely credited by critics and video game publications for raising the standards of single-player video games, particularly with the series' second installment, Among Thieves, which is considered to be one of the greatest video games of all time. Reviewers have praised the games for their high production values, quality in storytelling, character design and animation, voice acting, realistic graphics, technical innovation, music score, gameplay mechanics, and delivering an enjoyably cinematic gaming experience to players. Critics have likened the series to Hollywood-produced action adventure films, particularly with the Indiana Jones films, and Tomb Raider, which helped pioneer the action-adventure genre in video gaming. After the release of Uncharted 4, the series had sold over 41 million units, with the fourth installment becoming the highest-selling in the series with over 8.7 million copies sold. The critical and commercial success of the Uncharted games have been pivotal to the success of PlayStationduring the seventh and eighth generation of video game consoles, and has helped elevate Naughty Dog's reputation to a highly respected video game developer in the industry.