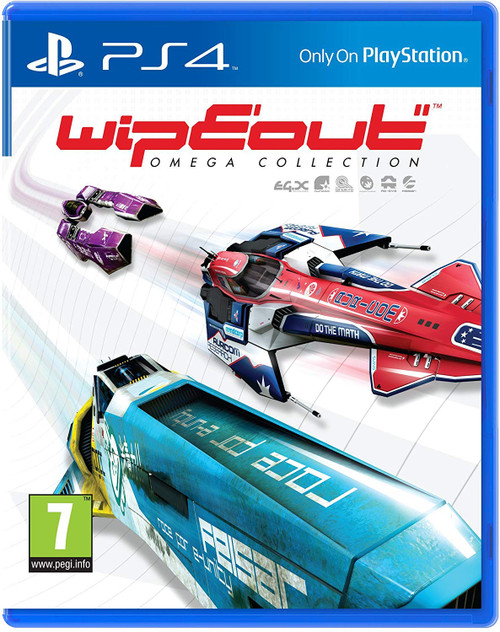 Wipeout Omega Collection (stylised as WipEout Omega Collection) is a futuristic racing video game developed by XDev, Clever Beans and EPOS Game Studios and published by Sony Interactive Entertainment for the PlayStation 4. It is the tenth standalone title in the Wipeout series and the first not developed by original developers Studio Liverpool, following the studio's closure in 2012. It is a remaster of the previous two entries in the series: Wipeout HD, its Wipeout HD Fury expansion and Wipeout 2048. The game was released on 6 June 2017 Wipeout Omega Collection is a remaster of the previous two titles in the Wipeout series: Wipeout HD (with its Wipeout HD Fury expansion) and Wipeout 2048. Wipeout HD itself contained content from Wipeout Pure and Wipeout Pulse. Players control anti-gravity ships which are owned by racing corporations (effectively referred to as 'teams' in-game). Every ship has different characteristics; for example, each ship's statistics vary in handling, thrust, top speed and shield strength (and in 2048, firepower). Each craft is equipped with an energy shield which absorbs damage sustained during a race; energy is lost whenever the player's ship collides with the trackside barrier, other ships, or is hit by weapons fire. If the shield runs out, the player's ship will explode and is consequently eliminated from the race. However, the player may replenish energy by absorbing weapon pick-ups. Nine games modes appear in Omega Collection: Zone, Tournament, Speed Lap, Time Trial and Single Race from HD; Zone Battle, Eliminator and Detonator from Fury; and the Career Mode from 2048. The games contain 26 unique tracks and 46 unique ship models, and include local split-screen and online multiplayer.Also, Racebox (which enables custom races across all game modes) is included for all tracks.The campaigns are split into 3 groups, in a similar manner to how the HD and Fury campaigns were separated in Wipeout HD Fury. Omega Collection was designed to be run at 1080p on the PlayStation 4 and 4K on the PlayStation 4 Pro, both at 60 frames per second. Van-Über and Tigron officially returns to the series, both gaining new designs, with the former as a digital pre-order bonus, though they are later bought as a redeemable code to obtain Van-Uber for free, with Tigron being unlocked early in the game. A name synonymous with PlayStation, WipEout is the rapid combat racer that defies gravity and defines generations. Known for its blistering speed, iconic music and pure multiplayer mayhem, WipEout has starred on every PlayStation format since 1995 – and is now set to rip through the air on PlayStation4 and PlayStation4 Pro. Featuring all the content from WipEout HD, Fury and 2048, WipEout Omega Collection packs in 26 reversible circuits, 46 unique ships, a ton of game modes and some new and classic music tracks. It’s time for WipEout veterans to come out of retirement and new pilots to make their debut. KEY FEATURES Enhanced Visuals: Compatible with PS4 and PS4 Pro. Enhanced with PS4 Pro. Under The Hood: WipEout Omega Collection features content from WipEout HD, WipEout HD Fury and WipEout 2048. Rapid Combat Racing: Rip around sharp bends, power through stomach-churning loops and dive down sheer drops as you take out your rivals with well-timed weapon blasts. Competitive Multiplayer: Play online with friends in eight-player races, or classic two-player split screen. VR functionality available upon installing the VR Patch update file. Sony Entertainment Network account, high-speed internet required and 31 GB minimum HDD space required. Users must be 12 years or older.

The Sinking City Day One Edition Xbox One