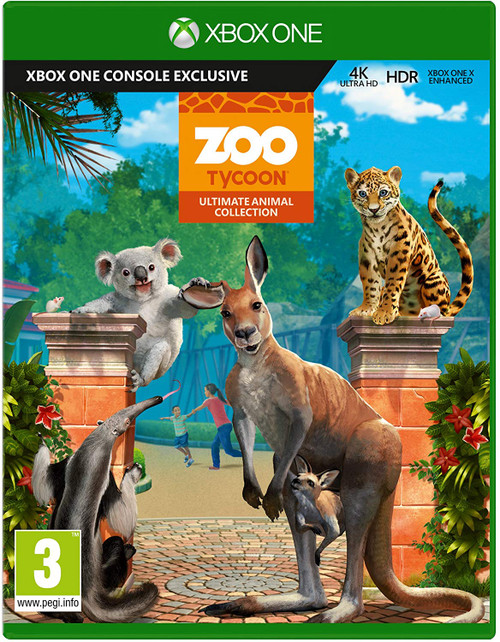 The wildly popular Zoo Tycoon series gets fully-remastered and set to crank up the excitement, challenge, and fun of building the ultimate zoo. Let your imagination run wild with "Zoo Tycoon: Ultimate Animal Collection"! Choose from almost 200 visually stunning animals and the largest, most detailed selection of environments ever, then build, manage, and maintain your dream zoo alone or with up to four players on Xbox Live. This zoo simulation will charm animal lovers of all ages. Easy to start and easy to play, Zoo Tycoon on Xbox gets you up close and interacting with the animals and zoo, offering intuitive controls and fun tutorials that allow players of all ages to have fun. Play smart as animals and guests will react to your creative choices and ultimately decide your chances to become a Zoo Tycoon.

Let your imagination run wild with Zoo Tycoon: Ultimate Animal Collection, now remastered in 4K Ultra HD and HDR. Build, manage, and maintain your dream zoo alone or with up to four players on Xbox Live. This zoo simulation will charm animal lovers of all ages.

The goal of Zoo Tycoon is to create a thriving zoo by building exhibits to accommodate animals and keeping the guests and animals happy. Exhibit-building is one of the primary goals of Zoo Tycoon. To keep the guests and animals happy, exhibits should be suitable to the animal; for example, a lion is best suited to a savannah environment. Choices in terrain, foliage, rocks, shelters, fences, toys and the presence of zookeepers all contribute to the suitability of an exhibit and the happiness of the animal. Guest happiness is dependent on animal choice, animal happiness, buildings, and scenery. Buildings may include bathrooms, restaurants and food stands, shops, or entertainment buildings such as movie theaters. Scenery involves aesthetics that raise guest happiness slightly, such as topiary art, light posts, or benches. Keeping both animal and guest happiness allows the player to gain monetary awards and steady income. To help manage the expanding zoo, players can employ maintenance workers, zookeepers and tour guides. If the animals are released and escape from their enclosures, they can kill the guests. Sometimes, when animals are unhappy, they can attack the zookeeper. There are three modes in Zoo Tycoon: Tutorial, Scenario, and Freeform. Tutorial teaches the player how to build exhibits and keep guests happy. Scenario mode has the player complete a series of objectives under restrictions. These objectives may include achieving a certain guest and animal happiness, achieving a certain exhibit suitability, displaying a certain number of animals, or breeding a certain animal. Freeform allows the player to choose the amount of money and the map with which they start. They are presented with an open lot and a limited selection of animals, buildings, and scenery available for purchase. As the game progresses, more animals and items become playable. Additional animals and items may be researched, where money is invested to make them playable.
Main Story/Campaign Length
10-15 Hours
Key Features